James Frank Truby was born in l944 in Milwaukee Wisconsin. He comes from a family of painters, most prominent his great uncle, the noted Wisconsin painter, Francesco Spicuzza. He attended the University of Wisconsin-Madison where he received his bachelors and masters degree.  After coming to Winter Park in 1967, he studied oil painting at the McIntosch School. Beginning in l993, Mr. Truby was represented by the Marie Ferrer Gallery of Winter Park. In 1995 he began studying portrait painting privately with Hal McIntosch. Over fifty of his portraits are in private collections across the United States and Europe.  He has painted the portraits of distinguished figures which include a noted Look photographer and a New York Times Best Selling  author. His public commissions include the Bishop of the Catholic Diocese of Orlando and a bank president in North Ireland. During the summer months, Mr. Truby paints landscapes in North Truro, Cape Cod.  A collection of his portraits can be seen at the Suz Letzig Gallery in Orlando Florida. 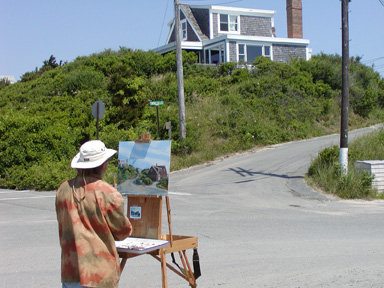